How to help them help themselves 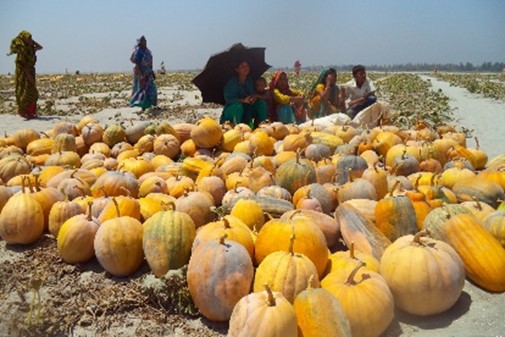 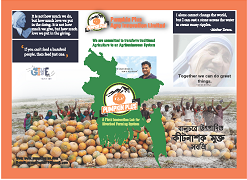 Bangladesh has an estimated 1723 square kilometers of newly accreted lands, locally known as char land along the banks of Brahmaputra / Teesta River system in the North and along the southern coastal districts of the country. These transitional char lands in the inland river systems are composed of coarse sands and by definition these belong to the government, but in reality, these are occupied, accessed or used by settlers in the vicinity of these chars for sandbar cropping of food crops. The poor farmers, who are displaced settlers due to recurrent river erosion, produce food crops such as rice, maize, pumpkins, vegetables and fruits and raise livestock animals on these ‘unusable’ lands. Accessing to these marginal lands provides food security and livelihood opportunities for the extreme poor through transforming lands, transforming lives. The innovation comprises the demonstration and widespread adoption in two districts of North West Bangladesh of ‘sandbar cropping’, an innovative, simple, cost-effective technology which transforms silted barren lands created by flooding and, as a result, helps thousands of displaced, extreme-poor families surviving on the edge of mighty rivers to escape from extreme poverty and hunger; climate change and covid19 shocks. 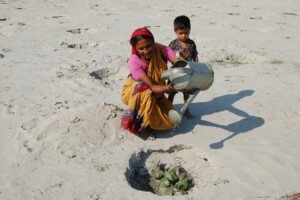 Bangladesh is a deltaic country located within the floodplains of the three great rivers; the Ganges, Brahmaputra and the Meghna. These rivers drain a total catchment area of 1.72 million Sq. km of which only 7% lies within the country, and has an estimated 2709 Sq.km (IWM & PA, 2018) of newly accreted lands, along the banks of these river systems in the North of the country. After each rainy season, large sand islands appear in the main rivers of NW Bangladesh. These transitional lands or char islands are composed of coarse sand and by definition belong to the government. But in reality, these charlands have been inhabited by people who became landless or were displaced due to river erosion, floods or other natural disasters. The geographical location makes the area vulnerable to frequent natural disasters which adversely affect the lives and livelihoods of the people living in these charlands. Communities living in these excluded and remote islands suffer from lack of basic services, ill health, malnourishment and hunger. Women & children are the most vulnerable as, in the absence of alternative livelihood; men often migrate to the cities for employment.

Additionally, the unprecedented Covid-19 pandemic has caused disruptions to global trade, business, and education. The virus outbreak and the associated economic crisis are posing huge challenges, raising many unknowns and imposing wrenching trade-offs. Both crises are global, but their impacts are deeply local. Bangladesh is equally affected by this contagion. The economic consequences of the Covid-19 outbreak are tough to handle as the entire global supply chain has been interrupted due to worldwide transportation shutdown, affecting both international and local firms. To date, over 8280 people across the country died due to Covid 19 and around 540,592 people have been tested positive. Apart from the breakdown of the health system, economic situation of the country is deteriorating. Millions have lost jobs. Poverty rate in Bangladesh may rise to 40.9 per cent if Covid-19 causes 25 per cent fall in family incomes, according to the SANEM estimate based on the BBS’s income and expenditure survey data. Consequently, the successes in alleviating poverty over the past two decades may fizzle out.

Fueled by this philosophy, the author has come up with the vision of transforming traditional agriculture into a women and youth led agribusiness system through commercial integration by adopting a climate smart innovation by the use of barren transitional sandbars (islands in riverbeds) to support erosion-affected communities for self-resilience, peace and prosperity. 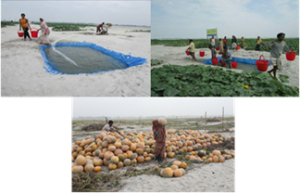 The new approach allows land and water access for the erosion-affected poor at comparatively low cost to produce pumpkin, squash and other high value vegetables as safe food and generate good cash for their living and diversify business by other round the year options. It also allows access to finance and deployment of cost-efficient irrigation system for large scale expansion of sandbar cropping through an innovative women and youth led agribusiness model which cuts time and labor cost by half, doubles productivity, profitability, water- fuel efficiency by incorporating improved solar based irrigation to reduce cost by half. The experienced pumpkin producers, with their existing knowledge and skills, partner with the company to attract commercial investment to transform traditional charity or project-based handouts to run their production system to large scale and producer driven commercial model.

The approach is especially game changing because it utilizes vulnerable climate change affected degraded soil, i.e., sandy infertile barren lands, for large scale pumpkin and other high value production through the Pumpkin Plus model to meet the demand for food for now and beyond 2050 by securing food for over 230 million people as projected. Pumpkin can be stored over 6-9 months, which will allow them higher opportunity to protect the optimum gain from selling their produces in lean season with higher price and coping with flooding. This is a highly Vit-A rich product, thus helps to protect night blindness of the child. This is especially relevant for Bangladesh which is suffering from climate change, and need efficient water and land management to ensure food security. More ambitiously, the innovation can offer a great chance to minimize land loss due to erosion and urbanization. Moreover, the technology appears to have a much wider application in other dry areas and could even become an important coping strategy in some areas adversely affected by climate change in the world. 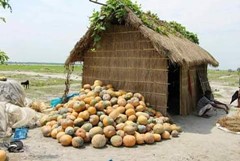 In order to mitigate the vulnerabilities of these extreme poor people and to provide alternative livelihood options, sandbar cropping technology has been practiced in the barren sandy chars for over the last one decade. Using this cropping technology, squash, pumpkin, water melon, zucchini and high value other crops are now being produced in abundance in these fallow and sandy lands. Crops like pumpkin, produced on the sandbars can be stored over a year and therefore greatly assist poor HHs in income generation and ensuring food security. Sandbar cropping has transformed barren landscape and mini desserts into productive green fields. By digging small pits and lining these pits with compost, this technology has demonstrated that these areas can be made productive. Large scale irrigation is not necessary as the water table is close and there is great potential of utilizing solar irrigation system to reduce cost at a significant level.

Since its inception, Pumpkin Plus has been working in these char areas, developing capacity of the farmers in sandbar cropping technology and creating market linkages for ensuring better market price of their produce. The innovator of the technology and founder of the company has successfully demonstrated that the growing of pumpkins in small compost pits dug into the sand is both possible and profitable. Over a decade, since 2005-2022, a total of 194,000 million tons of pumpkins worth £ 50.60 million were produced by over 24,540 farmers of which 80% were women. The company monitors a representative sample of those household’s incomes and calculates cost benefit ratios ranging from 1:3 to 1:5 within five months.

Conclusions and Call for Cooperation 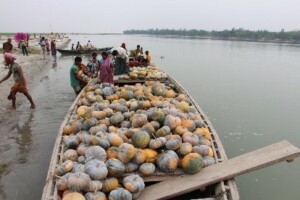 However, this action research shows sandbar cropping faces challenges, including increased competition and bargaining for such lands, and support for technology, credit and marketing of pumpkins. Fortunately, ensuring continued access of the extreme poor to sandbars is already a policy priority of the government in line with its on-going poverty reduction programs by focusing Agriculture Policy 2018, 7th Five year and Delta Plan BGD 2100 with particular focus on charland development.

These initiatives call for development support and research collaboration for upscaling sand bar cropping technologies, collective bargaining strengths and capacity building of the poor, diversified cropping on sandbars, and developing market linkages for sandbar products/pumpkin based processed products for national and overseas markets.

Leave a reply Click here to cancel the reply